The Do 228 “New Generation” is equipped for the monitoring of the sea areas and detection of marine pollution (e.g. oil spills) and as air support for emergency coordination of the Central Command for Maritime Emergencies in Germany. Both airplanes are equipped with special devices such as a side looking radar, infrared and ultraviolet sensors, microwave radiometers and fluorescence lasers as well as video cameras. Thus, maritime contaminations or emergencies discovered during the flight, are immediately forwarded to the emergency command via direct data lines. From there the central command can plan the further procedure and coordinate the following steps. Normally, the airplane is operated by a flightcrew of 3 persons, two pilots and one operator. The operator is in charge of radar image evaluation, and coordinates the pilots to fly the optimum path, to find and detect the polluted area with the sensory equipment in the most exact manner. In case of emergency support, the operator acts as a link between surface units and the command center, to coordinate and guide rescue units as well as providing exact and current data to them. 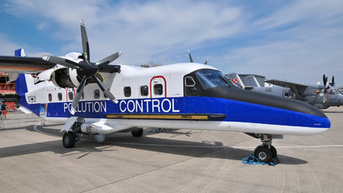 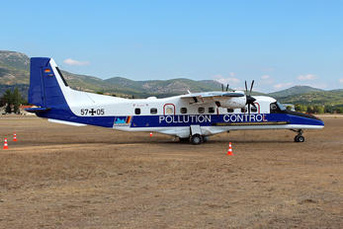 Since 1986, the German «Pollution Control» has flown over 40.000 flight hours over the 115000km² area of the north- and baltic sea and has detected over 4700 pollutions. The Central Command for Maritime Emergencies in Germany is working closely together with other nations such as the Netherlands, Denmark, Norwegen, Sweden and Poland.

The Do 228 has replaced the former Do 28, and is in service since 1994. In 2010 the Do 228 got the «NG» upgrade which included a new glas cockpit design, a more efficient 5 blade propeller and about 300 other changes to improve the efficiency of the airplane.